This month, Sam Martens, Director of Commercial Operations at Mission Solar will share the story of how the company ended up in San Antonio and will discuss related industry dynamics.

As one of only a few solar manufacturers in Central Texas, Mission Solar began with providing modules to San Antonio’s municipal electric utility, CPS Energy. Mr. Martens will walk us through Mission’s expansion into commercial and residential markets, future growth possibilities, and how the solar manufacturing industry continues to evolve, including industry challenges and strengths. 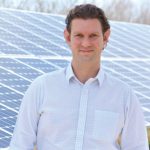 Sam Martens has been with Mission Solar since 2013. He serves as Mission Solar Energy’s Commercial Operation Director. He previously worked as an equity analyst at Macquarie Group, the Royal Bank of Scotland and most recently CIMB Band, Malaysia, responsible for the Asian semiconductor and solar sectors. Earlier in his career, he worked in information technology (IT) policy research at a Korean government think tank. He has his bachelor’s in arts degree in international studies, focusing on economics and international studies, from Korea University. He is fluent in English and Korean.

We hope you will join us on the fourth Tuesday of August for this interesting discussion on solar manufacturing in Central Texas.