Many of you probably remember our concern when Austin Energy proposed slashing the solar budget by 42% for fiscal year 2014 – which we’re now in. But public outcry and our meetings with Austin City Council members made a difference. The budget was fully restored and we can expect to have another great year for solar in Austin.  That was back in September. 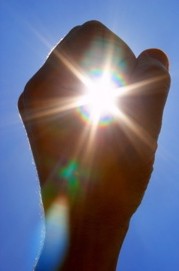 Just yesterday, Austin City Council passed a resolution that expands the city’s commitment to development local solar.  Of our existing solar goal of 200 megawatts (MW) by 2020, half will now have to be locally sited and half of that local solar will have to be distributed systems that are owned or leased by customers.

That’s great news for local jobs, because there’s no way to outsource installation of small, local solar systems.  Someone has to be here to do a site inspection, file the paperwork with Austin Energy and actually install the system on someone’s room or in their yard.

City Council also instructed the City Manager to consider adopting the 400 MW by 2020 solar goal put forth by the Austin Local Solar Advisory Committee (LSAC) into the Generation Plan update next year.

We have Council Members Chris Riley, Laura Morrison and Bill Spelman to thank for leading this effort, but the resolution was adopted unanimously, and I know that others on the Council are eager to see solar thrive in Austin.  Send the City Council a thank you note.

With the help of the many people in Austin who are concerned about climate change, air pollution, water use, creating good local jobs, and keeping electric rates affordable, we’re going to make sure the 400 MW solar goal is included in the Generation Plan in 2014.

In the meantime, we can turn our focus to ensuring that solar owners continue to be credited a fair value for the energy they put out on the grid for the rest of us to use and that more attractive solar financing options are made available.  Better financing, options for solar leasing and a community solar program are all essential for expanding access to solar for lower and middle-income families and all of us who rent.