Business leaders, environmentalists and low income advocates are behind a push to get Austin to increase its solar energy goal to 400 megawatts by 2020 and expand solar programs to meet that goal.

A diverse group of community leaders appointed to the Local Solar Advisory Committee (LSAC) by City Council examined solar opportunities in Austin and unanimously recommended that we double our 2020 solar goal, creating an estimated $300 million in net economic benefits and staying well within our current affordability goals.

“The Austin Energy leadership is saying we can’t afford to do this now,” says Tom “Smitty” Smith, director of Public Citizen’s Texas office.  “But they are only looking at replacement power costs.  The value of solar is far more than replacing wholesale power.  It increases revenue for the city from off system sales of peak power we won’t need at home. Expanding solar goals will mean reduced costs for peak power, fuel, hedging, insurance, maintenance and transmission, as well as reduced water use and pollution.  The LSAC looked at all of those factors and that’s why the business, solar and environmental community all agreed that we should expand our goals now.” 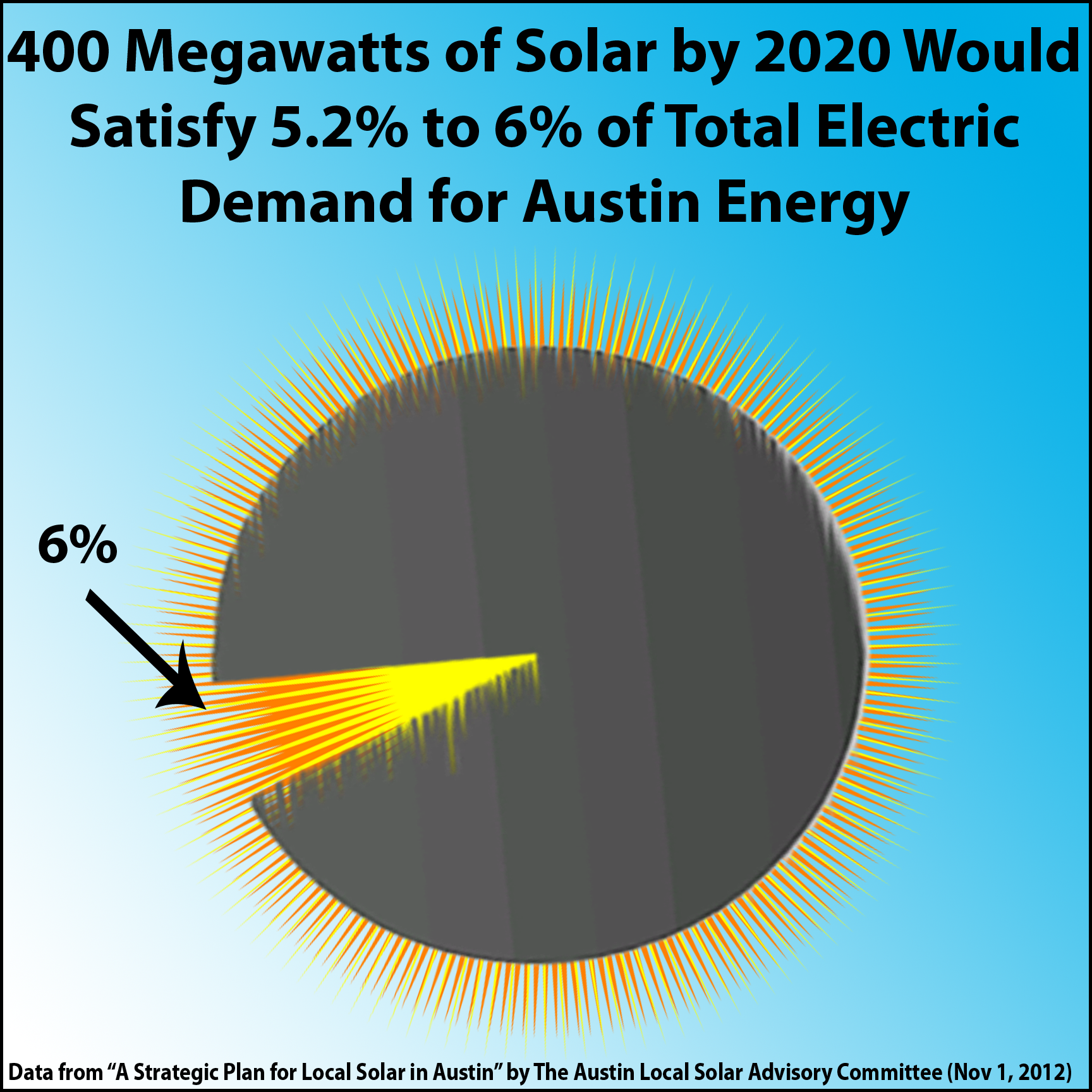 The LSAC report shows that expanding the solar goal to 400 MW by 2020 – which would meet 5.2-6% of Austin Energy’s electric demand – would be affordable.  Current affordability limits are set at 2% of anticipated utility revenue and the solar program would never go beyond 0.31% – likely less, according to the LSAC report and would reduce costs by 2020.  The affordable nature of the plan is what got low income advocates to support it.

Susan McDowell, executive director at Lifeworks supports the expansion of Austin’s solar goals.  “Keeping up with rising electric bills is a struggle for many working families, especially in the summer.  Solar is cheaper over the long run and can ease that pressure.  We need more solar programs geared toward working families, including those who rent.”

Instead of embracing the recommendations, Austin Energy has proposed a 42% cut to its solar rebate program for fiscal year 2014, from $7.3 million to $4.2 million.  Supporters of the LSAC recommendations are asking City Council to move in the opposite direction and expand the solar budget to $10 million dollars.

We need a solar budget large enough to meet demand. This year, Austin Energy reduced the solar rebate to avoid running out of money before the year was over.  Solar is becoming more popular and we should take advantage of that.

While the LSAC did envision an eventual reduction and end to solar rebates, the Committee recommended investing more now to establish the industry in Austin and take advantage of a 30% federal tax credit for solar installations.

“Low solar prices, coupled with the 30% federal tax credit, give us the opportunity to get more solar installed for each dollar spent than ever before,” says BJ Stanbery, CEO of Heliovolt.  “And unlike most of the other energy sources we rely on, our investment in solar feeds into our local economy.  The time to establish the Austin solar business cluster is now because the 2016 federal ITC reduction from 30% to 10% is setting the timeline for industry maturation.”

The solar industry has already created hundreds of jobs in Austin, many of them in installation.  Solar installation companies are small, locally owned business and the jobs they create can’t be outsourced.

Carey Ibrahimbegovic, president and CEO of Greenbelt solar says, “We’re working hard to bring solar to as many families and business as we can and we’re creating good local jobs as we do that.  Austin area solar companies already employ over 600 people and meeting a 400 MW solar goal will create an estimated 420 new local direct and induced jobs each year from 2013 to 2020, with an average increase in local annual payroll of over $10 million.”